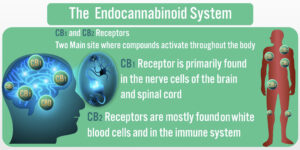 The Endocannabinoid System is a fairly new discovery with new things being learned about it daily.  These are just some of my notes.

In 1964, researchers studying the effects of cannabis led directly to the discovery of an unknown biochemical communication system.  It was named the Endocannabinoid System for the plant that led to its discovery. This system has been found to play a crucial role in regulating our physiology, mood, and everyday experience.

All vertebrates and invertebrates are known to have this ancient internal signaling system that evolved over 600 million years ago, long before cannabis appeared on planet Earth.  Endocannabinoids and their receptors are found in fish, reptiles, earthworms, leeches, amphibians, birds, and mammals, except for insects. Scientists believe that its long evolutionary history proves that the ECS must play an important part in animal physiology.

More will be added later.