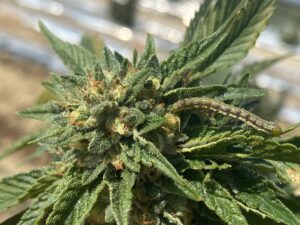 “Caterpillar” is the common name for the larvae of members of the order Lepidoptera (the insect order comprising butterflies and moths). Armyworms and cutworms generally eat seedlings. Bollworms and budworms typically feed on seeds and inside flowers. Hemp Borer and European corn borer are often found inside of stalks, while cabbage moths feed on leaves. The type of Lepidopteran pest doing the damage will determine the approaches that can be taken.

Caterpillars have a segmented body: a head, a thorax, and an abdomen.

Similar in appearance to foliage feeders

Larvae are quite small, with a maximum size of about 6-8 mm.

Younger larvae are cream colored, with a dark brown head.

Variety of colors with dark stripes along body

Depending on the species either overwinters as eggs or as pupae in a chrysalis or cocoon.

The larval stage usually lasts from about two weeks to a month, and is the longest life stage

Pupates, and emerges later as an adult moth.

Overwinter as pupae or larvae

Larvae feed for 10-30 days, pupate, and emerge as adult moths. 3-6 generations depending on species

Stage that survives the winter outdoors is a full-grown larva found within the stems/branches or seed heads of hemp.

They transform to the pupal state in late winter/early spring and later emerge as the adult moth.

After mating the females lay eggs on hemp plants.

Eggs hatch & caterpillar attempts to tunnel into the plant, often entering at junctions of branches.

Overwinter as pupae in the soil in temperate climates (no overwintering in tropical).

Monitoring: Watch for moths in flight!

Look for feeding holes, excrement, and webbed or rolled leaves.

Eggs are typically laid on the undersides of leaves.

Seedlings can be completely consumed.

There is often stem damage at the soil line.

Check for pests at night.

Cause wilting of a bud or small flower stalk that it has tunneled.

Entry points are often marked with a bit of loose frass (their sawdust-like excrement).

The larvae develop within the stem/branch and the sites of injury typically show a slight swelling.Evidence of parasitism:  parasite cocoons next to caterpillars, darkened caterpillar eggs, or exit holes in dead caterpillars.

Eggs are hemispherical with ridges that radiate like wheel spokes

Loose webs and frass around buds

Black-light traps – Night-flying moths are attracted to the light and trapped in the funnel-shaped trap below the light.

These are best used to identify the species of moths and to time Trichogramma releases.

Remove volunteer hemp, an alternate host which can sustain the first generation.

Use a large-bore syringe to inject mineral oil into stalks. Wipe away frass. New frass indicates a need for repeat injection

A microbial insecticide that kills only caterpillars; caterpillars must feed on treated leaves to be affected.

It’s safe to use near bees, beneficial insects, and wildlife.

Most effective on small caterpillars and breaks down rapidly.

Repeat weekly while caterpillars are present.

Some strains have 3-7 day residual activity

Spring/Summer aphids molt every 3-4 days, which may reduce efficacy

Can be used alone or in a tank mix with Bacillus thuringiensis (vars. kurstaki, aizawai)

Drill through moth eggs to deposit 1-3 of their own eggs.

Trichogramma larvae eat out the insides of pest eggs, pupate, and cut an exit hole in moth eggshells for winged adults Their short life cycle (7 to 10 days) allows as many as 30 generations per season, and rapid population increase.

Release when moths are in flight

Will focus on eggs and immature stages, but can catch adults

Reapply every two weeks to suppress populations, monthly for maintenance

Reapply 2-4 times, two weeks apart to establish in most crops.

Attack prey during all larval stages and as adults.

Can handle much larger prey

Distribute throughout crop to minimize canabalism

Takes several months to become established: other biological controls should be used along with Podisus.

5 adults per tree, 25 eggs per tree in bioboxes

Weed removal from around house