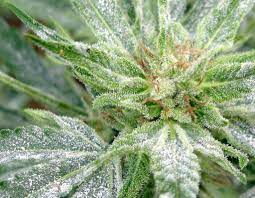 Powdery mildew (PM) is the most important fungal disease of cannabis, but also one of the most easily managed of the foliar diseases. It is a fungus that grows on the upper surface of leaves and parasitizes surface cells. Affected cells may be killed, causing brown areas on leaves; whole leaves can also be killed.

The primary symptom that is noticed is the powdery coating produced on the leaf surface which becomes prominent as infestations progress. This is made of the fungal threads (hyphae) and spores of the fungus.

It may be mistaken for – and can occur at the same time as – the silk produced by spider mites.

Powdery mildews largely grow on the surface of the plant.

Infections begin when a spore lands on a leaf and successfully germinates.

Germination is best if near 100% relative humidity (RH) occurs on the leaf surface,

But spores can germinate in environments down to 10-30% RH.

As the fungus grows, it produces a peg that penetrates plant cells to feeds on nutrients and continues to grow/spread.

Optimum temperature for growth is 56-64 °F but spores can survive and grow at considerably higher temperatures.

Dry spores are produced that are easily spread on winds.

Spore production can occur within a week after a plant is initially infected, allowing the disease to spread rapidly.

Infections tend to occur earliest on leaves in the middle or lower parts of the plant.

Fans can likely have several effects on powdery mildew:

Plants not overcrowded and regularly blown with strong air current have reduced risk of disease from PM.

However, fans will also readily allow dispersal of the dry spores.

Neem oil has been shown to provide some level of systemic protection: applied as a soil drench.

Trilogy and Triact 70 brands that have a particularly good label for use on indoor-grown herbs and spices.

Oil sprays are typically used at a 1-2% dilution in water, mixed/shaken thoroughly.

Do not use on plants that are stressed by drought do not spray under hot, dry conditions

Both products act by drawing moisture from fungal stages and changing the leaf surface pH.

Excessive use of sodium bicarbonate may cause some risk of plant injury due to sodium build-up.

Solutions of either should be freshly prepared for each use as they degrade when standing mixed with water.

The addition of potassium/sodium bicarbonate with horticultural oils can improve spreading and coverage.

Hydrogen peroxide is sometimes suggested but there is no data to show that it is effective for powdery mildew.

Hydrogen peroxide is better used as a sanitizer; it is more effective for bacteria.

PM needs living hosts for survival and usually dies after a few weeks without access to living plant tissues.

Mode of action: lipids produced by the bacteria that are toxic to the fungus.

Best used at planting/transplanting when it can be incorporated into the planting media.

Under optimum conditions roots can subsequently be protected for several weeks.